We Prove Diminished Value, Structural Damage if any and why it was not made whole
We Guarantee, you will Win your Diminished Value case if you use us as your Expert Witness

After the repairs have been made, the value of this vehicle is only $19,800.
This Is a Whopping 56% or $25,200 Diminished Value.
Would you pay the same price for a vehicle with accident damage as one without damage?

IF you have been in a vehicle accident and your vehicle has been repaired, you are entitled to diminished value. Your personal injury attorney should be asking for that loss of value on your behalf. We at Lemon Protection write Diminished Value Report to help your attorney win that money. The formula is proven and has a solid foundation that will hold up in any court.


Documents you need to provide to Lemon Protection:
Send us a copy of the Estimate of Repairs, including all the supplements lst, 2nd or 3rd and your contact information.
E-Mail: lemonprotection@yahoo.com 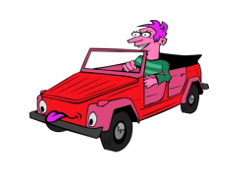 The table below shows several Toyota Dealerships' offers for a post-accident 2010 Toyota Tacoma. 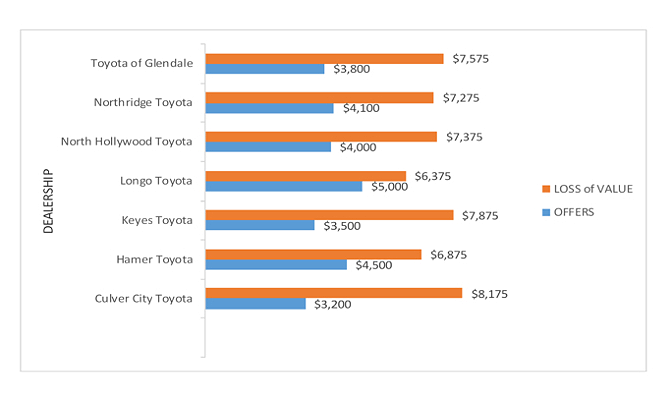 After the accident damage had been repaired, this Tacoma was valued by Lemon Protection formula at $5,001 which had the same or nearly the same appraisal value placed on it by several Toyota Dealerships in Los Angeles (see above table).

The repaired Tacoma was taken to several Toyota Dealerships in the Los Angeles area for an appraisal offer to buy. The offers ranged from $3,200 to $5,000, which confirmed that Lemon Protection' s Diminished Value Report was not only better in giving a true loss of value and current worth, it was much more reliable to use in a court of law.

Methods used by others include taking the Kelly Blue Book and discounting the repair cost to give a value. This is unreliable in truth of value, with no foundation of true Diminished Value. Foundation is what judges want to see, and we have it.

Lemon Protection's Diminished Value Report will hold up in a court of law with a strong foundation, while others have lack of foundation.

The insurance company offered $1,000 to settle a loss of value claim when the loss was over $6,700 after several months of time spent with lots of phone calls. The client found the Lemon Protection website and requested a Diminished Value Report. The Estimate of Repairs was sent to Lemon Protection and a Diminished Value Report was done and sent to him within 72 hours. Two weeks later, the case settled for over $4,650, which was nearly 70% of the $6,700 diminished value. It worked out well because the client showed the willingness to fight for the money due him, and he came out ahead because of it.